It has been a year in the making that I have been thinking about writing a “Cheating On Harlem” section for Harlem Food Local.  Though my goal has always been to spotlight the hyper local food trends in my own backyard, the truth is that New York has amazing food happening on almost every corner, and I need to start talking about it.  So, after much agonizing over adding an decidedly Un-Harlem section to the blog, I decided that there would indeed be a “Cheating on Harlem” Section, and that the inaugural post would be a review of a restaurant that has food that you can’t get anywhere Uptown.  In fact, I’m pretty sure that you would be hard pressed to find a Japanese Dining experience in New York that was as authentic, accessible, and intimate as that which my good friend Erica and I experienced at Sushi Dojo.

Sushi Dojo is a tiny, low profile restaurant on an East Village block that you might just miss if you didn’t know it was there.  Surrounded by alarmingly bright and colorful fast food signage, Shushi Dojo is understated and reserved.  Though the interior of the restaurant is an impressive architectural accomplishment because of the huge 14 seat sushi bar that runs almost the full length of the dining room, there is nothing extremely unique about the look of this skinny Sushi restaurant in the East Village.   The clean lines of the walnut-hued wood, the shiny modern black accents, and the black and white banners hanging over the passage to the kitchen emits the same subtle rigidity that one would associate with chefs that have devoted their lives to a food art as serious as sushi.   But this solemn ambiance seems almost like a deliberate setup; a subtle trick on the diner, because the entire experience at Sushi Dojo was anything but rigid and inaccessible.

I went to Sushi Dojo expecting that I would be reviewing it based on a comparison to every other sushi experience that I have had in New York (and there have been a LOT of them), but one glance at the menu and the extensive sake list, it was clear my prior experiences would mean very little.  Though they do offer a few familiar items like miso soup, edamame, and tempura appetizers, those who insist upon eating their raw fish wrapped in rice, seaweed, and drenched in soy sauce and wasabi will find no refuge towards the back pages of the menu.  You see, Maki (Rolls) were invented for the Western pallet, and are almost never seen on a menu in Japan.  While she prepared our raw (and so fresh it was still moving) Tako (octopus) behind the sushi bar, Hiromi Susuki, the Assistant Chef and the only female Sushi Chef I have ever seen in New York, told us  told us that all of their fish and the influences for their hot and cold plates are coming straight from modern food culture in Japan.  Sushi Dojo aims to provide an education (Dojo in Japanese means ‘education’) and an unprecedented accessibility to the truly authentic Japanese dining experience for the curious, but mostly ignorant (me!) common New York eater.  Even the famed Chef Morimoto, with whom Executive Chef David Boudhadana has trained, let’s his more timid diners off the authentic adventurous hook by offering a variety of heavily Americanized options infused with Japanese flavors, and a menu page full of maki.  But Chef David doesn’t do that because he wants you to learn something or eat something new when you come to dinner at his place, and he wants to guide you through it. 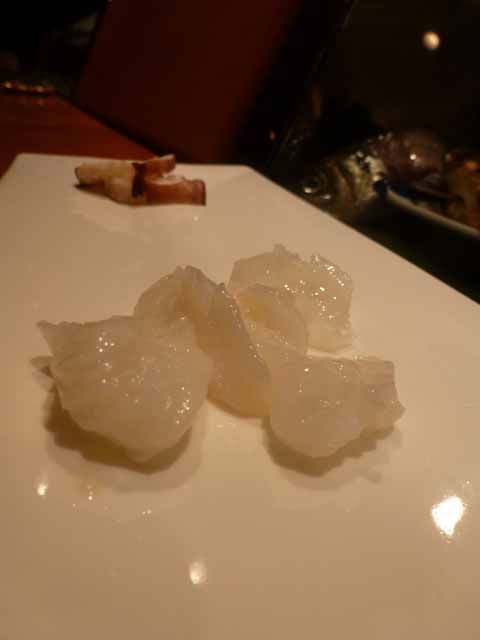 In a decidedly westernized sushi restaurant landscape Sushi Dojo stands out as a truly unique education into contemporary Japanese food culture.  Chef David, Chef Hiromi, and their bang up front of the house team have made special efforts to make themselves the bridge between you and the intimidatingly rigid Japanese dining experience.  If you don’t know what Unagi means, all you have to do is lean towards the bar and ask.  If you express nervousness about trying raw octopus for the first time you will get a cheerful rebuttal encouraging to go outside of your comfort zone.  If you’re unclear about the difference between sushi and sashimi you’ll get an informative response void of a condescending tone and an eye roll (which is an experience that I have had one too many times at fancy sushi restaurants in Midtown where they charge you $12 for one piece of overcooked Ebi).  If you need to know which menu items are made without any gluten (welcome to my Newly Gluten Free Life), then you will get walked through each and every item that is safe for your dietary restrictions.

This new experience, which I can only equate to the feeling of having dinner at an old friend’s house (who just happens to have highest grade fish you can eat in New York hook-up), is how we, as New York diners, should demand all food be consumed.  No matter the type of food or the interior décor, ever customer should feel as comfortable as we did eating raw octopus, raw squid, soft shell shrimp, live fluke, Japanese Barracuda, and Tasmanian Trout for the very first time.  Having received such a thoroughly enjoyable education on true Japanese eating, it is likely that, the same way I constantly refer back to my favorite cookbooks for inspiration, I will return to Sushi Dojo as often as I can for another crash course in why I should never eat a Sushi roll again. 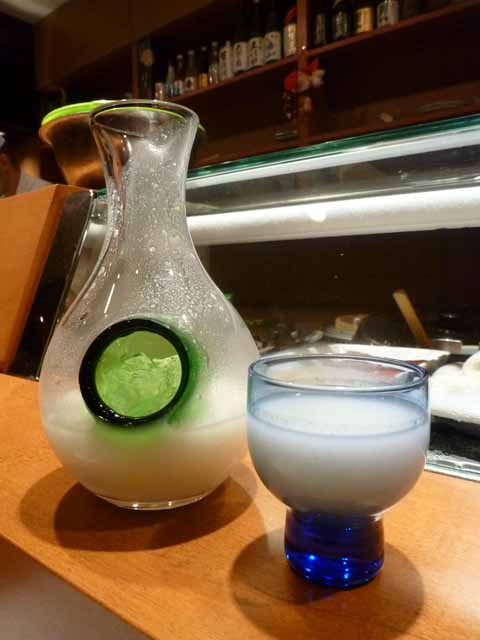 Sake:  Even if you aren’t a fan of sake, know nothing about sake, or always drink beer, GET SAKE.  If you are Sake ignorant like both me and Erica, the list of filtered/unfiltered, 40% or 60% polished Sakes might as well have been written in another language.  But, if you are navigating this list with Max Lidukhover, Sushi Dojo’s a fast talking Brooklyn boy with a serious knowledge of  rice wine,  you’ll enjoy your meal with a sake accompaniment that will enhance it so much more.  Max introduced us to a variety of Sakes with outstanding flavor, dimension, and smoothness, making the selection process excruciatingly difficult.  After much deliberation we chose a bottle of unfiltered sake called Kikusui Perfect Snow, which we felt had the most interesting texture and taste.

Natsu Nibutashi:  Though simply described as lightly fried eggplant in a dashi broth, it was so much more than the sum of its parts.  A soft melt in your mouth flesh that maintained its textual integrity without ever approaching mushy, these chunks of eggplant were seasoned with a precise delicacy that highlighted its inherent the meaty complexity.

Ebi Karaage:  Fried perfectly in a light dusting of potato flour (yay for gluten free shrimp!), I fell hard for this shrimp.  Because I had never had soft shell shrimp before the experience of eating the head, legs, and eyes only enhanced the salty crunchiness that encased the sweet shrimp.

Omakase and Chef’s Special Sushi (served sashimi style on our request): Each and every piece was selected, sliced, and prepared by Hiromi, Chef David’s right hand woman and the mastermind behind Sushi Dojo’s tangy signature sushi rice.  Each piece placed on the leaf in front of me and on the Chef’s special plate were mini edible pieces of art that were almost too pretty to eat.  But eat we did, and each raw piece of squid, octopus, uni, and fish were all different sides of the same oceanic flavor cube.  The raw squid had a jelly texture with a profound creaminess, while the chewy texture of the raw octopus and the sweet, briny, luxurious texture of the uni (which I had told Hiromi I didn’t like at all yet it ended up on my leaf) turned into the dark horse champions of the evening.